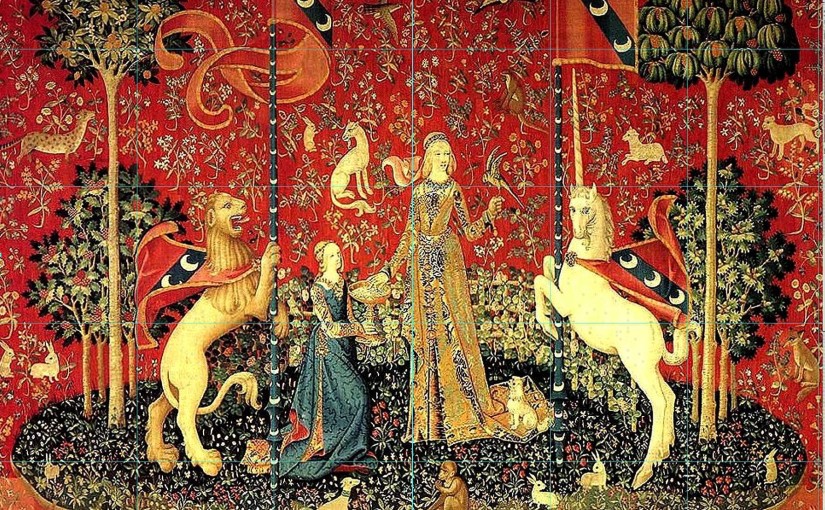 Reading George Martin’s “A Song of Ice and Fire” can be like looking at a tapestry of the middle ages that features central figures in action, a few witnesses in the background, but also meticulous details of flora and fauna. Once you look beyond the main image, and concentrate on all the tiny details you notice the creator worked in some elves dueling with each other, and some dark figure hiding behind bushes, a fox catching a hare, seemingly all unrelated to the main figures and story in the forefront. We can dismiss these almost hidden scenes as unimportant, mere detail to build the background world. But it takes more hours to work in all those details than it does to weave the main scene. Then we notice the fox sigil embroidered on one of the main figures and start to consider that maybe it is not as unrelated as we first thought; that it actually may be telling us something more about the main figures. Once we understand and can make associations the tapestry gains layers of depth that sheds a new light on the whole. It does not change the story, but it makes it so much richer, renders clues, and interconnected.

A straightforward hint in the books themselves to read beyond first appearance is given in Catelyn’s second chapter of aGoT, when Maester Luwin describes the box with Lysa’s hidden message in.

“A wooden box, you say?” Catelyn said.
“Inside was a fine new lens for the observatory, from Myr by the look of it. The lenscrafters of Myr are without equal.”
Ned frowned. He had little patience for this sort of thing, Catelyn knew. “A lens,” he said. “What has that to do with me?”
“I asked the same question,” Maester Luwin said. “Clearly there was more to this than the seeming.”
Under the heavy weight of her furs, Catelyn shivered. “A lens is an instrument to help us see.”

Catelyn could feel dread stirring inside her once again. “What is it that they would have us see more clearly?”
“The very thing I asked myself.” Maester Luwin drew a tightly rolled paper out of his sleeve. “I found the true message concealed within a false bottom when I dismantled the box the lens had come in, ….” (aGoT, Catelyn II)

So, the lens was a hint for Luwin to dismantle the box and he discovered a false bottom. In this“second layer” he finds a message written in a secret language. I tend to think this is George’s instructional metaphor on reading the books, where the books are like the box. The lens is the hint to remind us to look more closely how the books are written. And he urges us to deconstruct the writing to find the double layers and its “hidden message” written in “secret code” (and no, don’t take me too literal on this. No Da Vinci Code. I get to use poetic license too). What is required from the reader to understand the messages? Well, Catelyn has foreboding feelings just by looking at the sealed message. While not all readers agree with the interpretation, most readers do agree that certain scenes, dialogues or descriptions give them a sense of foreboding, a chill, just like Catelyn has. So, trust your intuition that these paragraphs do contain a foreshadowing or a hint to the solution of a mystery. For the interpretation you use Luwin’s rationality, and methods of literary analysis – parallels, references, metaphors, motifs and symbolism.

While tapestries are woven with thread and color, stories are woven with words to create the imagery. The oldest form of storytelling remains with us via mythology that sometimes took epic proportions. With that many people being illiterate, storytelling was an oral tradition. Storytellers used tricks to remember the variety of stories – they used verses, but also symbolism, repetitive scenarios, themes of certain imagery that belong together. These were not only known to bards, but the audience as well. In telling us his epic, George R. Martin needs to use similar tricks, borrowing from known mythological material that we are somewhat intuitively acquainted with at least, but also teaching us certain meanings by repetition of the same symbols in similar events.

Roger Zelazny wrote the sci-fantasy “Lord of Light” novel regarding human colonizers of another planet, dominating the local lifeforms by using a reincarnation machine that allows them to pretend to be a Hindu god of the Hindu pantheon. Throughout the novel the reincarnating colonizers at times choose or end up as another Hindu god with different attributes. So there is never a complete 1:1 mapping from Hindu mythology to a certain character. Roger Zelazny is a personal friend of George Martin and my own copy of the book carries George’s review comment, ‘One of the five best SF-novels ever written’. George pays homage to the book in aSoIaF by using “Lord of Light” as a title for R’hllor.  George R.R. Martin does something similar in aSoIaF, except without involving a sci-fi machine, but rather actual death and resurrection or a more symbolical journey into the underworld in dreams or via trauma, and referencing to different mythologies – Welsh, Arthurian, Greek, ancient Middle Eastern, Norse, North American…  On top of that there are the fairytales we still grow up with as children – Grimms’ brothers, Andersen, …

It is quite impossible for me to cover and uncover all. But in this blog I will reveal for example what we can expect to happen in a broad general way when a bear is featured or referenced in a scene, how it is almost logical in a mythological sense why Bloodraven’s cave is North of the Wall, or that Beric Dondarrion and Lady Stoneheart happen to be undead in the Riverlands, and how Arya’s arc in relation to the Faceless Men is more than that of revenge.

On navigating my blog: Most of my essays are grouped in a theme on which the analysis focuses. The Chthonic Cycle focuses on the mythology of the underworld and how George incorporates this into the plot of characters as well as George’s world building. So far, they are best read sequentionally as they build on previous chthonic essays. The Trail of the Red Stallion  analyses the possible meaning of the often featured ‘red stallion’ and horse scenes in general, such as tourneys. Bears and Maidens  deals with, well, bear related plots, characters, families and of course the song using the perspective of global subarctic bear-folklore, taboos and beliefs. Most of these can be read in any order you wish, though it helps to read at least the basic background on bear folklore in its main title page and the song‘s analysis. Ragtag Band of Misfits goes into identities, backgrounds, origin and roles of various ragtag teams George has set up all over Planetos.

That said, some essays can be read as a stand-alone theory or analysis. These are

A few of my theories that I have not had time yet to incorporate in my blog but can be found on westeros.org are:

Credits: I wish to thank fellow contributors of westeros.org and the Last Hearth for the exchange of ideas so far during discussions, support or challenge, and/or their own hard work in a similar vein on different elements of the books – Lucifer Means Lightbringer, Evolett, Lady Blizzardborn, Lady Barbrey, Sly Wren, Lady Sharya, Lady Gwynhyfvar, Mithras, Bemused, Kingmonkey, Voice, Lady Dianna, The Fattest Leech, Darkstream, Painkiller Jane and so many others!